The Best Season in Franchise History

BEDFORD, MA -- Despite falling one game short of this season’s EHL Championship Game, the East Coast Wizards just finished off their best campaign in the team history. After finishing the regular season with a record of 29-12-3, the Wizards won their division for the first time, and thus earned themselves a bye in the First Round of the Eastern Hockey League (EHL) playoffs.

Following the First Round bye, the Wizards battled their way past the Vermont Lumberjacks in a very tough Second Round matchup, punching their ticket to the 2019 EHL Frozen Finals. After going 1-2-0 in the Round Robin stage at Providence College, the Wizards saw their season come to an end, slightly sooner than they had hoped.

“We are obviously a little disappointed, but at the same time still very proud," said Wizards head coach and general manager Freddy Meyer. "Each season we have taken a stride forward, with this season being the biggest step. From making the playoffs, to winning a First Round series, to earning a First Round bye, I am very happy that we’ve made progress each year. This year was the best regular season we’ve ever had, and then we followed things up by advancing further than we ever had before. Kory [Falite] and I are very proud of this year’s team.”

As Meyer mentioned, the best regular season in Wizards’ history was followed up by the best postseason the franchise has ever had. The team got stronger as the year moved along, and they entered the playoffs as the youngest team in the postseason picture. That’s a very bright sign towards what’s to come for the Wizards.

Looking ahead, the Wizards have had three players make their NCAA Commitments so far, with a few more individuals finalizing their decisions over the next couple weeks.

On the other side of the spectrum, both Meyer and Falite are now tasked with filling the holes of the departing players, and keeping up with the progression in the upcoming 2019-20 season.

Be sure to keep an eye on the EHL website (EasternHockeyLeague.org), as the next schedule will be released later this spring.

Also, remember that you can catch all the #Eshow action live on HockeyTV, and be sure to keep up on all things Wizards at ecwjrhockey.com or by searching #BringTheMagic on Facebook, Twitter, and Instagram. 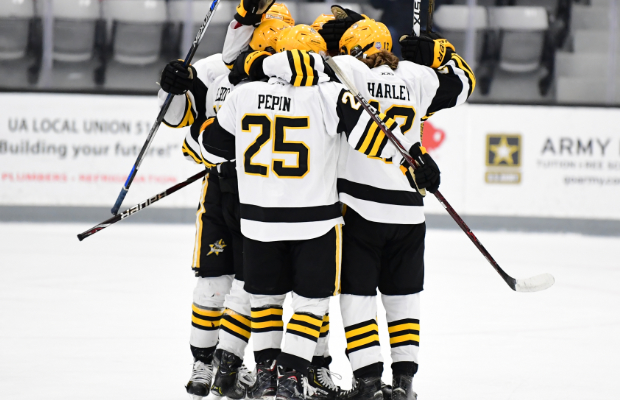