All Eyes on a First Round Bye

EHL Team Set for Final Month of the Regular Season

BEDFORD, MA -- As we turn the corner towards the final month of the regular season, the East Coast Wizards find themselves in a tight, three-team battle for the South Division of the New England Conference. In the Eastern Hockey League (EHL), the 18 teams are split up into two separate conferences, and within each conference, there are a pair of divisions. At the end of the regular season, all four division winners earn themselves a key First Round bye in the EHL Playoffs. The Wizards are in a contention for that reward, in a battle that may come down to the very last weekend of the regular season.

“It’s between us, the Seahawks, and the RoughRiders,” said Wizards head coach and general manager Freddy Meyer. “Luckily for us, we play the Seahawks two more times at home, to go along with one final matchup with the RoughRiders in Connecticut. In a way, we control our own destiny with how we perform in those matchups.”

As Meyer mentioned, the Wizards have three games left against the opponents they are fighting with for that First Round bye. The matchups with the Seahawks are set for February 14thand March 2nd, with the latter being the final game of the regular season for both teams.

As for the final meeting with the RoughRiders, that’s scheduled for February 21stat SoNo Ice House. The Wizards have played slightly above average hockey on the road, but on the contrary, they have been excellent at home. Heading into the final stretch of the regular season, the Wizards own a mark of 12-2-0 in 14 games player so far at The Edge Sports Center.

Be sure to keep an eye on the EHL website (EasternHockeyLeague.org), as we inch our way closer towards the postseason. Also, remember that you can catch all the #Eshow action live on HockeyTV, and be sure to keep up on all things Wizards at ecwjrhockey.com or by searching #BringTheMagic on Facebook, Twitter, and Instagram. 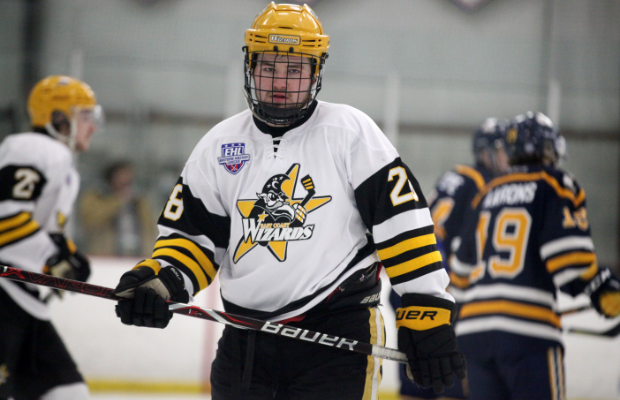 Mike Bermingham ('98) has been as reliable as any Wizards defenseman, with 13 points in 16 total games to date.